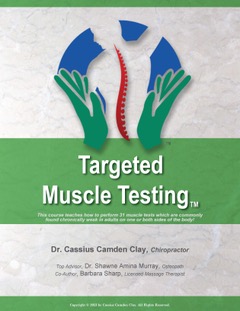 For 37 years, Dr. Cassius Camden Clay, Chiropractor, has intensively studied, researched, and practiced muscle testing. Muscle testing is a relatively new method for evaluating muscle strengths and weaknesses. Dr. Clay is a second generation muscle tester. He respectfully stands upon the shoulders of giants in this extraordinary field. He invites you to stand upon his shoulders and take muscle testing to its next level through your research and discoveries.

Targeted Muscle Testing teaches you how to muscle test and then specifically teaches 31 easy-to-learn muscle tests that are commonly found chronically weak in adults one or both sides of the body.

A NEW PARADIGM The standard belief that exercise is the only way to make weak muscles strong is false! We now know that we can make a significant number of weak muscles instantly strong and keep them strong using specific connective tissue stretches and joint motions which we do to ourselves—the Quick Self Fixes.

Targeted Muscle Testing is bringing muscle testing to the mainstream by teaching how to test muscles exactly where muscles are commonly found chronically weak. Your success at finding weak muscles will be phenomenal! Your success at making these weak muscles instantly strong using Quick Self Fixes will be amazing!

Targeted Muscle Testing stands on its own. Quick Self Fixes is not the only healing system that instantly strengthens muscles. Yet, it may be the only healing system that makes and keeps these muscles consistently strong without the aid of others! You are encouraged to use Targeted Muscle Testing to evaluate and validate your healing systems of choice. For instance, Chiropractic, Assisted Yoga, Massage Therapy, Yoga, Cranial-Sacral Therapy, Physical Therapy, Personal Training, and Acupuncture make all or some of the targeted muscle tests instantly strong. Even meditations, which facilitate the relaxation of muscles, can make weak muscles test instantly strong.

In 1949, Florence and Henry Kendell, both Physical Therapists, set the standard for medical muscle testing in their book entitled Muscles, Testing and Function.

In 1980, Dr. Alan Beardall, Chiropractor, began publishing a series of books on Clinical Kinesiology which elaborated on the concept of testing sections of muscles individually.

Traditional muscle testing misses more muscle weakness than it finds. Traditional muscle testing does not actually test the whole muscle as it indicates. Dr. Clay’s research proves that in medium to large muscles, the entire muscle is not weak; yet, isolated sections within these muscles are commonly weak. For example, the center or belly of larger muscles are commonly found weak, while the origin and insertions of these muscles commonly test strong. Targeted Muscle Testing teaches individuals how to test muscles exactly where sections of muscles are found chronically weak in adults. Muscle testing people exactly where they are weak is easy. Dr. Clay has figured this out for you! Mostly by inventing muscle tests focusing on testing the bellies of sections of muscles.

Dr. Clay has pinpointed 31 important muscle tests which are easy to learn and are commonly found weak in adults on one or both sides of the body. Twenty-four of these 31 muscle tests do not exist in contemporary literature. Through necessity, Dr. Clay developed these 24 muscle tests to specifically target chronically weak muscles or sections of muscles discovered through Subtle Muscle Palpation.

The Quick Self Fixes App
Now Available!
Check it out here!

Call Us Text Us